On This Date in Latin America – October 2, 1968: The Tlatelolco Massacre in Mexico

After more than eight weeks of protests against the PRI’s rule, political exclusion, and police violence, the Mexican army opened fire on a peaceful demonstration, killing several hundred protesters near the Plaza of Three Cultures in Mexico City forty-four years ago today. 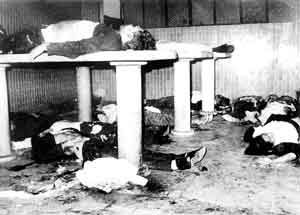 The bodies of victims killed in the Mexican military’s massacre of protesters on October 2, 1968.

While student protests had erupted throughout much of the world in 1968, including in Brazil, the US, France, Japan, Egypt, Turkey, Ethiopia, and elsewhere, Mexico had been relatively unaffected by the global social mobilizations of the first half of 1968. However, that came to a sudden, if initially-inconspicuous, halt on 23 July 1968. The events that would ultimately lead to thousands protesting in the streets and a government crackdown that left hundreds of dead started with a simple street brawl between rival students from two high schools, one a preparatory school that housed wealthier students, and the other a vocational school for working-class students. As the fight, likely fueled by class tensions, escalated, a principal called the police. However, the mayor badly overreacted, sending in Mexico’s granaderos, a paramilitary riot police force that was the subject of almost universal hatred in Mexico, to break up the fight. While social tensions increased, they remained simmering until July 26, when leftist students marched to celebrate the anniversary of the Cuban Revolution. The granaderos once again appeared, and this time, a full-blown street riot erupted, with cases of police brutality.

These events in late-July were the match that ignited Mexican student protests; however, the fuel of such protests ran deeper. As Mexico’s middle-class started to witness growth and expansion during the economic “miracle” of the late-1950s and early-1960s, it became increasingly disenchanted with its exclusion from national politics, led by the Partido Revolucionário Institucional (Institutional Revolutionary Party; PRI). On July 29, students from Mexico’s National Polytechnic Institute (IPN) and National Autonomous University of Mexico(UNAM) announced a general strike and issued a series of demands that reflected their growing dissatisfaction with the increasingly authoritarian PRI; demands included the release of all political prisoners (including those in jail from the 1959 railroad workers’ strike), the removal of police officials, the disbanding of the granaderos, and the abolition of Article 145 of the Constitution, which, among other things, allowed the arrest of anybody attending meetings of three or more people under the auspices of “social dissolution.” The movement quickly gained support within Mexico City itself; by August 13, students held their first rally in the Zócalo plaza.

Students protesting against the PRI on August 13, 1968.

However, they were not alone, as professors, intellectuals, housewives, and workers joined them. President Gustavo Díaz Ordaz appealed to students to end the “violence” and blamed “foreign students” for agitation. However, his appeals failed to stem the tide of protests; the student demands had tapped into many of the broader currents of discontent among Mexico City’s urban middle class. By August 27, another rally in the Zócalo united more than 500,000 people protesting directly under Díaz Ordaz’s balcony in the National Palace. In response, Díaz Ordaz ordered tanks to occupy the Zócalo, setting  a precedent that would take on more tragic consequences in the coming weeks. In the military and police’s attempts to break up the protests, at least one student was murdered; it marked the first death of a student in protests, but it would not be the last.

Gustavo Díaz Ordaz, President of Mexico from 1964-1970. Díaz Ordaz’s use of repression and his ties to the 1968 Tlatelolco Massacre made clear the authoritarian nature of the PRI’s “Institutional Dictatorship.”

With the clear use of militaristic repression against peaceful protesters, other sectors of Mexican society became bolder in their own criticisms of the government. Business leaders questioned the government’s violation of individual rights in newspaper articles, while intellectuals and artists criticized the government for its use of armed force. To try to counter popular unrest, the government ordered bureaucrats to demonstrate; however, its plans backfired, as the civil authorities, feeling coerced into taking a stance they did not necessarily hold, marched through the streets baa-ing like sheep.

October 1968 was supposed to be a showcase for Mexico. For the first time, the Olympic committee had awarded an Olympics to a Latin American country, and Mexico City was set to host the Summer Olympics in mid-October 1968 (and the World Cup in 1970). Fearing the protests might undermine the image of Mexican stability in the international arena as the world prepared to turn its eyes to Mexico, the Díaz Ordaz administration ratcheted up its use of repression. On September 2nd, he pledged he would take any measures necessary to “protect” Mexico. By September 13, 10,000 army troops invaded the campus of UNAM, violating campus autonomy that the government had granted the campus in 1929 in order to arrest 500 students. Furious, the rector resigned, and now the government’s repression was clear to all. Strikes continued throughout September, even as a large meeting was planned for October 2 at the Plaza of Three Cultures in the Tlatelolco neighborhood of Mexico City.

By all accounts, the protests began peacefully enough around 4PM, with around 5000 people gathering. However, at 6:30PM, pandemonium erupted. Helicopters illuminated the plaza, and shots were heard, leading to chaos. Snipers from the presidential guard occupied the apartment buildings surrounding the plaza, opening fire on the crowd and picking off protesters one by one. Police in the crowd also attacked students; the reflective armbands they wore let snipers know not to shoot them. Thousands tried to flee, many leaving behind their shoes or other items of clothing in the rush. Before the night was over, more than 2000 people had been thrown in prison, and the bodies of many littered the floors of police stations and hospitals.

Mexican forces taking no small pleasure in the arrest of students who had gathered to peacefully demonstrate on October 2, 1968. 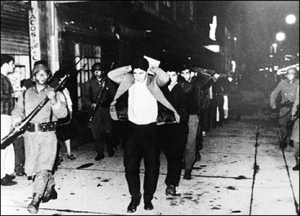 Students arrested at the Plaza of Three Cultures. 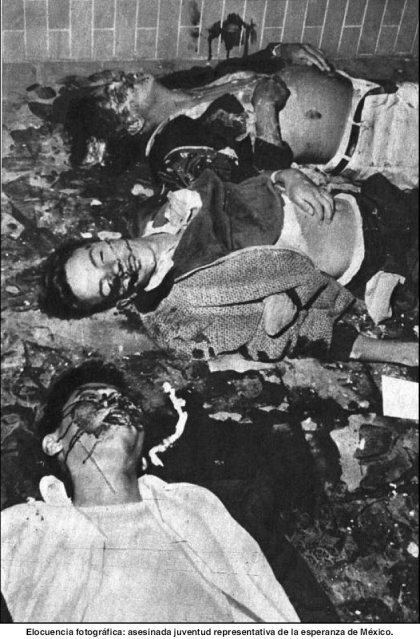 The bodies of just three of the victims of the Mexican armed forces in the Tlatelolco Massacre of October 2, 1968. Scenes like this one could be found throughout parts of the city in the wake of the military’s crackdown on a peaceful protest at the Plaza of Three Cultures.

The next day, the government tried to cover up the massacre, blaming terrorists for opening fire on police and claiming only eight people had died; it later revised those numbers upward, first to 18, then to 43. However, based on eyewitness accounts, and the reports of those whose family members never returned, some estimates place the number of those whom the Mexican state murdered that night to be more than 700. In spite of efforts to downplay the violence, foreign reporters had already begun arriving in Mexico City, and the next day, the massacre made headlines worldwide, with images smuggled out of the country by foreign journalists. The situation was severe enough that the Olympic Committee called an emergency meeting to decide whether to withdraw from Mexico; ultimately, they decided the Olympic Games would proceed, but the vote in favor of holding the games won by only a slim margin.

Although the Olympics took place, the Tlatelolco Massacre would have long-term ramifications. The arrests and murders devastated the student movement, and brought an effective end to the protests and rallies that had taken place throughout August and September. Many woman students who felt their voices had not been fairly represented by the male-dominated leadership went on to apply their politics to feminist struggles in the 1970s. Meanwhile, though the PRI would remain in power until 2000, the Mexican public increasingly saw the 1968 massacre as a turning point, revealing the PRI’s dictatorial and authoritarian hold on politics. As for the political leaders responsible for the massacre, they never faced charges; Díaz Ordaz died in 1979 (ironically, at the age of 68), and although Secretary of the Interior (and later, president from 1970-1976) Luís Echeverría was ordered to stand trial for his role in the massacre in 2006, a judge ruled in 2007 that there was not enough evidence to try Echeverría, who was responsible for the armed forces under Díaz Ordaz and who would oversee what came to be known as Mexico’s “Dirty War” in the early-1970s.

Luís Echeverría, Díaz Ordaz’s Secretary of the Interior, was responsible for Mexico’s military on the night of the Tlatelolco Massacre. He went on to become President of Mexico from 1970-1976; during his administration, military repression against the PRI’s opponents would continue in what came to be known as Mexico’s “Dirty War.”

As for the games themselves, though the massacre could not prevent them from continuing, the most enduring image from the 1968 Olympics would cause its own controversy, as American runners John Carlos and Tommie Smith held up their fists in the Black Power salute, acknowledging racial inequalities in the US. While critics blasted Carlos and Smith for “politicizing” the Olympics, the fact was that, from October 2 onward, the Olympics were already political.

Tommie Smith (center) and John Carlos (right) hold up their fists in a Black Power salute after winning gold and bronze (respectively) in the 200-meter dash. Australian Peter Norman, who finished with the silver, was supportive of both men, and even recommended Carlos raise his right fist when Carlos realized he’d forgotten his gloves.

I have a Ph.D. in history, specializing in Latin American History and Comparative Indigenous History. My dissertation focused on Brazil. Beyond Latin America generally, I'm particularly interested in class identities, military politics, human rights, labor, education, music, and nation. I can be found on Twitter at @ColinMSnider.
View all posts by Colin M. Snider →
This entry was posted in Human Rights Issues, Human Rights Violations, Impunity, Mexico, Mexico's Institutional Dictatorship, On This Date in Latin America, Police Violence, Sports in Latin America, Violence in the Americas. Bookmark the permalink.
Loading Comments...
%d bloggers like this: