Get to Know a Brazilian – Eduardo Gomes

This is part of an ongoing series. Previous entries can be found here.

Eduardo Gomes was born in 1896 in Petrópolis, the Imperial summer base of Brazil’s monarchy, in the mountains just north of Rio de Janeiro. His father had been a naval officer in Brazil before working as a businessman and journalist after leaving the military, while his mother was known for her artistic skills and knowledge of several languages. As a result, Gomes upbringing was reflective of the upper levels of what were at the time the nascent middle classes of Brazil in the first decades of the twentieth century and who would increasingly feel excluded from politics by the 1920s.

After attending private schools, at the age of 20, Gomes enrolled in the Military School of Realengo, with a focus on artillery, where he came into contact with Antônio de Siqueira Campos. Graduating in 1918, Gomes was stationed in the southern state of Paraná until 1921, when he enlisted in Brazil’s new School of Military Aviation, inaugurated in 1919 in Rio de Janeiro. Thus it was that he returned to Rio de Janeiro and adhered to the Revolt of 1922 that saw lower-ranking officer rise up against the First Republic over a number of causes. While most of the rebels decided to abandon the movement when the high-ranking officers suppressed the movement, Gomes was one of roughly eighteen men who marched down the Avenida Atlântica of Copacabana to face the loyalist army forces. Along with Siqueira Campos, Gomes was the only other survivor, though he, too, was badly wounded.

The iconic photo of survivors of the initial assault on the Copacabana Fort as they marched along Copacabana to confront the armed forces awaiting them. Eduardo Gomes is on the far left, next to the only other survivor – Antonio de Siqueira Campos.

Although sent to prison, Gomes was released in 1923 to await his judgement. Before his sentence could be issued, he went into hiding before taking part in the 1924 Paulista Revolt, the second revolt of the tenentes (the first being the 1922 revolt). His skill with aerial training made him a key figure in the movement, though an attempt to fly to Rio de Janeiro led to him having to abandon his plane amidst technical problems, and he again went into hiding in Rio de Janeiro while the tenentes in São Paulo, facing bombardment and a siege, went into the interior. Gomes ultimately was arrested trying to join up with the Prestes Column that continued to march throughout Brazil in protest against, and defiance of, the First Republic.

In the aftermath of the failed 1922 revolt and the 1924 revolt and Prestes Column, Gomes’ life  took a very different trajectory than Siqueira Campos. While the latter went into exile, Gomes remained in prison until 1926, when he was released. However, shortly thereafter, authorities decided to re-arrest him, and he again went into hiding, where he remained until finally turning himself in in 1929. Set free in May 1930, Gomes immediately began working with the Liberal Alliance that sought to bring an end to the oligarchical rule of the First Republic, and he played a small role in the armed uprising of October that ushered Getúlio Vargas into office.

With the First Republic oligarchy finally gone and his military office restored, Gomes sought to expand the presence of aerial power in Brazil. He served as the commander of the first air combat unit created after the 1930 revolution (with future junta member Márcio Souza Mello serving under his command). He helped create and direct the Military Air Mail in Brazil, which ended up being an important piece in the eventual foundation of the Brazilian Air Force and which launched its first flight from Rio to São Paulo in 1931. In 1935, communists, socialists, and tenentes (some who were Gomes’ former comrades in the 1920s, highlighting how the tenente movement was far more concrete in what it opposed than in what it proposed) rose up against the Vargas government; Gomes, as commander of an aerial regiment, was involved in the movement’s suppression. However, as Vargas consolidated power and in 1937 launched a “self-coup” that ushered in the Estado Novo, Gomes stepped down from his post as commander in protest of Vargas’s new government, though that did not prevent him from receiving a promotion to colonel the following year. Gomes continued to play a key role in the development of Brazil’s air force power, becoming a brigadier in 1941, when the Brazilian military created an independent Ministry of Air Force. Assigned to Brazil’s northeast coast, he worked with the US military who, concerned about the possibility of Nazi naval warfare off Brazil’s coast (the most eastern coastal area in all of the Americas), helped Brazil to construct new naval and air force bases in the country’s Northeast. As brigadier of this region, Gomes ultimately played an important part in US-Brazilian relations in the course of World War II.

With the overthrow of Vargas’s Estado Novo in 1945, Brazil held its first elections since 1930 in order to find a candidate to replace Vargas. The conservative (and anti-Vargas) União Democrático Nacional selected Gomes as their candidate to run against General Eurico Gaspar Dutra, whom pro-Vargas forces backed. The two candidates led to the curious reality that Brazil was exiting a dictatorship by selecting between two military officials (two other candidates ran for the Brazilian Communist Party and the National Agrarian Party, but both parties were small and/or divisive enough to effectively be ruled out from the start). According to at least some legends, during the campaign in São Paulo, Gomes’s supporters made and handed out small balls of condensed milk, butter, and powdered chocolate at rallies. Though apocryphal, some suggest that the sweets’ presence at his campaign rallies, and Gomes’ position as a brigadier general, led to the naming of the Brazilian dessert “brigadeiros”. 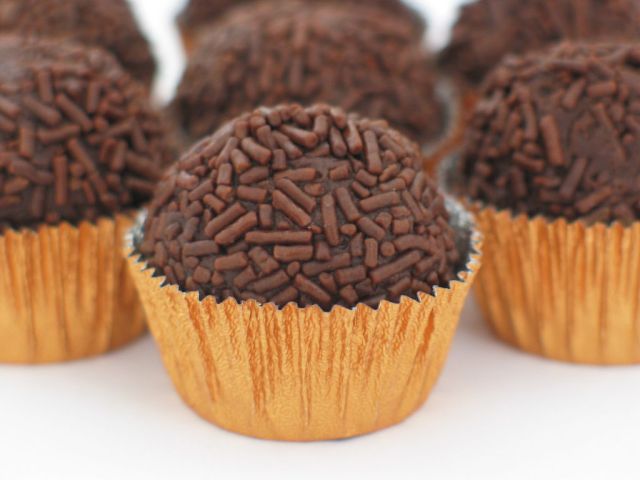 Brazilian brigadeiros, which may or may not have gotten their name during Gomes’ 1945 presidential run.

Despite the popularity (and, now, inescapability) of these Brazilian sweets, they were not enough for political transformation; Gomes ultimately lost to  Dutra, 55% to 35% (3.25 million votes for Dutra to 2 million votes for Gomes, with the remainder going to other candidates). Nonetheless, when the UDN sought a candidate to run when Vargas announced he would seek election in 1950, they again selected Gomes, who lost to Vargas 49%-30% (3.85 million votes to 2.3 million).

A poster from Gomes’ 1950 presidential campaign – “For President, vote for the Brigadier.”

Gomes continued to be a staunch anti-Varguista, however. When the scandal erupted around the failed assassination of Carlos Lacerda (which resulted in the death of an air force officer working as a bodyguard for Lacerda) and was ultimately tied back to Vargas’s secret service, Gomes was one of the lead voices calling for Vargas’s ouster. When Vargas committed suicide, a new interim government was formed, and Gomes was appointed the Minister of the Air Force from 1954 to 1955.

While the right-wing UDN opted to run Juarez Távora for its third campaign in 1955, the outcome was the same, as the UDN lost to Juscelino Kubitschek. A staunch conservative and UDN supporter by this time, Gomes spoke out against Kubitschek’s government regularly, saying that because Kubitschek had not won an absolute majority (he garnered 36% to Távora’s 30% and São Paulo Governor Adhemar de Barros’s 26%), he was not a legitimate president.

By the early 1960s, as Brazil’s political landscape became more polarized and contentious, Gomes remained politically vociferous even while going into the reserves. He played a small supportive role in the military coup of  1964. In 1965, Gomes became for the second time Minister of the Air Force, when Humberto Castelo Branco, the first of five presidents during Brazil’s military dictatorship, appointed Gomes to the position, and he served in that office until the end of Castelo Branco’s term in 1967. As Thomas Skidmore has argued, the role provided Gomes and other military leaders sympathetic to the UDN “a chance at federal power that they had seldom been able to win against the populist politicians.” [1] With the end of his term, and with declining health, Gomes retired, ultimately dying on June 13, 1981 – exactly one day after the fiftieth anniversary of the first flight of the Military Air Mail that he’d established and that helped lead to the creation of an independent Air Force. 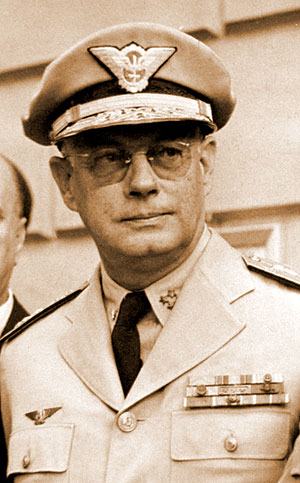 Beloved by many conservatives, reviled by many progressives, and celebrated by some tenentes and condemned as a traitor by others, Gomes’s path was a distinct one in which he never hesitated to mobilize or speak out against governments he thought were undemocratic, even while he paradoxically supported and served in what was arguably the most undemocratic regime of Brazil in the 20th century. Gomes’s life is also an interesting example of how the actors of the 1922 revolt and the Tenentismo of the 1920s often took very different political trajectories – with some, like Siqueira Campos, advocating for aligning with the Communist Party in the 1920s, while others, like Gomes, ultimately embraced conservatism and authoritarian regimes. For better or for worse, Gomes’ legacies as one of the founding figures of Brazil’s Air Force persist – perhaps most visibly in the Manaus airport named after him – and his contributions to Brazilian history are undeniable, regardless of whether one view them positively or negatively.

I have a Ph.D. in history, specializing in Latin American History and Comparative Indigenous History. My dissertation focused on Brazil. Beyond Latin America generally, I'm particularly interested in class identities, military politics, human rights, labor, education, music, and nation. I can be found on Twitter at @ColinMSnider.
View all posts by Colin M. Snider →
This entry was posted in Brazil, Brazil's Military Dictatorship, Get to Know a Brazilian, Latin American History, Latin American Militaries. Bookmark the permalink.
%d bloggers like this: