I wrote this little blurb on the Tomochic uprising for my Modern Latin American History class, and I thought I’d also post it here. My thoughts are based on Paul Vanderwood’s excellent The Power of God Against the Guns of Government and Ana María Alonso’s Thread of Blood, as well as archival and Spanish-language texts that I read in the course of researching and writing my dissertation. As a class, we read Robert M. Levine’s “Mud Hut Jerusalem,” so my references to Canudos are based on my re-reading of that article over the past week or so. I wrote these comments both to introduce students to the Tomochic uprising and as a conclusion to our discussion of neocolonialism and Progress in Latin America during the late nineteenth-century.

By command of Porfirio Díaz and Chihuahua governors loyal to him, an uprising that originated in the sierra town of Tomochic was brutally suppressed in mid-1892. As in Canudos, the Tomochic movement was millenarian in nature, meaning that its focus was on the Second Coming of Christ (or in Canudos the return of King Sebastian) to restore justice and true order to the world. Tomochitecos were suspicious of the idea of Progress because, from where they stood, all of its impacts seemed negative. The requirement of cash payments for goods and services rather than barter or reliance on a patrón to whom they felt kinship meant that most of them could not afford the services of doctors or other professionals that periodically visited the area. Neither could many of them afford basic necessities of life. Due to land and resource concessions granted to foreign railroad companies and large ranches or haciendas, they also found that they no longer had access to water, timber, and agricultural lands that they needed for subsistence. In general, for most rural folk the benefits of Progress were not forthcoming.

In the case of Tomochic and other Chihuahua serrano communities, a culture based on masculinity and violence further complicated matters. Many of the communities in northern Chihuahua had been settled by “military colonists”—generally mestizos/as from other areas in Mexico or the Southwestern U.S. (after 1848)—who received land grants in exchange for their willingness to campaign against nomadic Apache peoples. Until the capture of Geronimo in 1886 by a combined U.S. and Mexican force, Apache people continued to possess their traditional homelands in the U.S.-Mexico border region. In the context of Apache Wars, the military colonists were touted as “agents of civilization” who would bring an end to the “savagery” of the nomadic people.

Once the Apache Wars had ended, however, the outmoded economic and social systems of the military colonists themselves were considered backward. In a very short period of time former “agents of civilization” were recast as “savages” themselves. Mexican officials and journalists often referred to them as “Indios” to conjure up support for the idea that their lifeways were out of touch with the modernizing program of the Mexican state.

A man named Cruz Chávez was one such person. He was one of the more prominent mestizo citizens of Tomochic, who had a reputation for defending his honor with gun in hand. His family owned some meager lots of land in the valley surrounding the town and made a small living from them. He had fought in a few campaigns against Apaches. Like many other mestizos in northern Chihuahua, he considered himself to be above the indigenous Tarahumara peoples that had inhabited the Sierra Madres since long before the Spanish conquest. He and members of his family unabashedly exploited Tarahumara people through a system known as “amo-sirviente” (master-servant). It was much like the patronage system, except that in this case peasants were in turn exploiting the labor of indigenous people.

In the 1880s, Cruz Chávez held various local political positions in Tomochic. By 1889, he was tasked with defense of the local village chapel; in June of that year, burglars robbed the Church of its precious ornaments and vessels. According to prevailing folk Catholic beliefs in the region, the ornaments, vessels, and paintings of the virgin, Christ, and/or the saints held spiritual power in and of themselves—they weren’t simply representations of spiritual figures. For that reason, the robbery of such items was a horrible affront to the community. Additionally, in late 1890, the parish priest and head of the town council offered the community’s painting of the Virgen de Guadalupe to Governor Lauro Carillo when he visited Tomochic for the first time. To Chávez and others of like mind, Carillo’s promises of modern Progress rang hollow because he was a person that had deprived them of one of their most sacred connections to the spiritual. Chávez and others asked themselves: are these the types of things that governors do? By what authority?

Over the next couple of years, people in the Guerrero district (to which Tomochic belonged) became more and more suspicious of the ways that modernity and Progress were manifested in their everyday lives. Even priests appointed from outside of the community caught their ire because they attempted to stamp out regional folk Catholic beliefs and practices. As these people attempted to come to terms with governors who seemed only to take from them, the use of hard currency, loss of resources and land, as well as priests who considered them to be “unorthodox Catholics,” they turned to folk-religion for answers.

By late 1891, Cruz Chávez became increasingly belligerent toward local and regional political authority. Scholars have debated whether his actions were the result of material or spiritual matters, but it is clear that both were at play. In December of 1891 Chávez and many other Tomochitecos took up arms and declared that they would recognize no authority except that of God. In other words, they refused to recognize the authority of the Mexican state any longer. After a brief firefight in Tomochic, the rebels fled deep into the surrounding sierra where it was virtually impossible for federal or state troops to pursue them. They made their way to Cabora in Sonora to seek the council of Teresa Urrea, a young woman who had gained a reputation for healing and spiritual power. When they found that Santa Teresita (as she was then called) was not at Cabora, they made their way back toward Tomochic. Along the way, they engaged federal forces in several small skirmishes.

By September 1892, Chávez’s group had returned to Tomochic where they began to stockpile weapons. Known bandits from the surrounding areas also threw their support behind the movement. Although not invested in the spiritual side of the uprising, they shared the Tomochitecos’ resentment of Mexican Progress. Some, such as a man named Santana Pérez, had lost local political power due to the rise of Porfirio Díaz at the national level.

Porfirio Díaz’s government worked with Chihuahua state officials, as well as political leaders in the Guerrero district, to quash the Tomochitecos. First and foremost, Díaz was concerned that foreign investors would lose confidence in Mexico as a result of the uprising. Despite his wishes to quietly and quickly quell the revolt, however, Mexican forces were consistently unable to defeat Chávez and his supporters. Part of the problem was that the regional forces were comprised of men who had been forcibly impressed into service. Such was also true of Díaz’s fearsome Rurales. Many of the regional fighters knew of the Tomochitecos’ reputation and feared a direct engagement with them in battle. As one soldier reported, “they are a terrible lot . . . they know their Winchesters inside out; since they were children they have kept up a constant struggle against Apaches and bandits; they can run like a deer through the sierras without putting a foot wrong; but they are excessively ignorant and proud” (quoted in Alan Knight, The Mexican Revolution, vol. 2, p. 127).

In the end, an excessive show of force—as in Canudos—was necessary to repress the revolt. Federal forces laid siege to Tomochic and many of the rebels died of starvation and sickness. By the end of the siege, Cruz Chávez viewed himself as having a special calling from God to maintain the revolt, even at the cost of his life. The final holdouts (many had surrendered during the siege) were massacred as they tried to maintain their stand against the federales in the town chapel. Six survivors, including Cruz Chávez and his brother, were lined up and summarily executed on the morning of October 29, 1892. The rebellion had finally been suppressed, but a show of national supremacy came at great cost.

As we consider Canudos and Tomochic, it is important to count that cost. Both movements were disparaged as the work of backward, superstitious “Indians” in order to create a narrative in which the powerful state (as harbinger of Progress) should have been able to easily put down each revolt. When such was not the case, horrible losses of life were required to maintain the legitimacy of the idea that “Progress” would prevail over “backwardness” and “savagery.” In both Mexico and Brazil, each respective government massacred thousands of its own people to prove this point.

Although the massacres at Canudos and Tomochic were extreme examples of the struggle between peasants and modernizing elites, the stresses faced by their inhabitants were not. Neocolonialism brought modernization (Order and Progress) to Latin American nations at a tremendous price. By the early 1900s, revolts against the Porfirian regime intensified and nationalism grew by leaps and bounds throughout Latin America in opposition to foreign control of local economies. 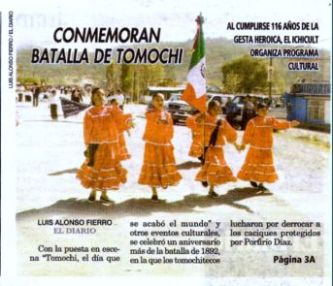 I teach Latin American and Borderlands (New Mexico) History, and I'm interested in digital teaching and research
View all posts by Brandon Morgan →
This entry was posted in Uncategorized. Bookmark the permalink.
%d bloggers like this: