On This Date in Latin America -July 24, 1993: The Candelária Massacre

In the early hours of the morning on this day twenty years ago, police in Rio de Janeiro murdered eight street children on the steps of Rio’s Candelária Cathedral in what came to be known as the Candelária Massacre.

Official violence in Brazil is nothing new – indeed, the use of brutal forms of both direct and indirect violence against the racially and socio-economically marginalized in Brazil can be traced back to slavery itself. Although Brazil abolished slavery in 1888, like the United States, it did little to address the greater political, social, and economic inequalities that left free blacks at a greater disadvantage within society more broadly, and the poor (and often racially “darker” within Brazil’s own complex matrix of race and ethnicity) faced ongoing challenges. For example, when authorities decided to renovate Rio’s downtown in the 1910s in preparation for a visit from the Belgian royal family, they forcefully displaced the poor who lived along the mountainsides in downtown, relocating them to the city’s periphery, a pattern that has continued into the twenty-first century, as hundreds of favelas now dot the city’s surroundings and mountains where upper-class high-rises cannot be built.

Even while Brazil’s poor continued to be marginalized within the cities, their numbers also grew considerably, and not just through basic population growth; between 1930 and 1980, the rural-urban populations saw a complete inversion, as Brazil shifted from a 70% rural population and only 30% urban population in 1930 to only 30% rural and 70% urban populations by 1980 (even while the total population in the country grew from around 35 million in 1930 to nearly 120 million in 1980). This growth in cities like Rio only added to the strain on the poor, as the growing numbers of rural migrants to cities were unable to find adequate-paying jobs in a glutted market and the favelas only grew.  By the 1960s, as the growing urban poor faced dim prospects, neglect, and poverty, they tried to survival any way they could. Many, especially children and mothers, would beg in the streets, even while the drug trade took root in the favelas, providing means to wealth to many who otherwise were completely shut out from economic improvement in Rio de Janeiro.

Unfortunately, the inequalities facing Rio’s urban poor were not limited to economics. Police also regularly targeted poor neighborhoods, employing increasingly brutal tactics to stamp out “crime”. Already by the late-1960s, police death squads were openly operating in the favelas, killing “criminals,” often extrajudicially. Though reports of the death squads appeared in some of Brazil’s more popular magazines, the fact that the victims were poor led many in the middle- and upper-classes to turn a blind eye, blithely accepting the police’s accounts of events and disregarding conflicting reports from the favelas themselves. Indeed, in the context of the military dictatorship (which had begun in 1964), the repression in the favelas increased, and while middle-class students and parents mobilized to defend human rights for university students and “political prisoners”, they were notably silent when it came to favela residents who were labeled “criminals.” The distinction was notable – the political prisoner/criminal dichotomy created a sense that those university students and activists were unfairly persecuted, while those in the favelas legally “deserved” their fates.

By 1985, the military dictatorship had left power, and with it, political and police persecution of middle-class activists had faded away. Sadly, the same could not be said for the urban poor, as police activities and the operation of death squads and paramilitary groups continued to operate, often killing dozens of “traficantes” (dead favela residents who in death were labeled traffickers, regardless of whether or not they were tied to the drug trade or criminal activity) and arresting numerous others, creating a massive strain on Brazil’s already-overcrowded prison system. As had been the case in the 1960s, the middle- and upper-classes, along with the media, continued to accept police accounts of violence at face value, never considering the ways in which the police repression and violence that they had associated with the dictatorship had continued in the favelas. Additionally, Brazil’s 1979 amnesty, which pardoned political prisoners and state agents guilty of torture or murder alike, had further reinforced a culture of impunity, giving the police a greater sense that their actions against the poor would go unpunished (a belief that has sadly persisted well into the 2000s, in spite of some judicial attempts to rein in extrajudicial violence, attempts that have been met with more murders of officials investigating such crimes).

All of that set the stage for the events of the wee hours of the morning on July 24, 1993. Facing these socioeconomic inequalities, neglect, and even abandoned by their own families, thousands of homeless children tried to eke out an existence any way they could, begging in the streets in popular tourist districts or in the business districts where foot traffic was heavy, and finding shelter where they could. One such place was Candelária Church, in the heart of downtown Rio. The church became a popular place for street children to gather, providing some space for rest as well as a place for socializing among those who shared similar plights. Of course, being at the church did not mean that they did not face persecution; police regularly harassed them. Then, on the evening of July 23, the police arrested one youth who had taken shelter there for sniffing glue; indignant, some of the other children threw stones at the car. The police left, saying they would get them sooner or later, a threat they regularly made to the children. Around midnight, cars pulled up to the church where around 72 children were resting. The cars opened fire on the unarmed children, wounding several  suddenly opening fire on the unarmed kids, leaving eight dead. The youngest was 11; the oldest was only 20.

At first, authorities did little, even while the news spread worldwide and led to international pressure for an investigation. Yvonne Bezerra de Mello, a social worker who worked with the children and the person who first arrived to help the children on the night of the 23rd/24th, tried to bring attention not just to the murders, but to the broader challenges and violence street children faced. Brazil’s slow legal system began to move, charging several police officers with the murders. Some of the survivors served as witnesses, but still faced violence for their willingness to speak out and identify their attackers; indeed, in 1995, police kidnapped 1993 survivor Wagner dos Santos, shooting him four times; though dos Santos survived this second attack, nobody was arrested for it.

Ultimately, the trial led to conviction of three police officers. In 1996, courts sentenced Nelson Oliveira dos Santos Cunha to 261 years in prison for his role in the attack; in 1998, Marucos Aurélio Dias Alcantara received a 204 year sentence; and Marcos Vinícius Borges Emanuel ultimately received a 300 year prison sentence in 2003. Yet in 2013, not a single one of them is in jail; Cunha and Alcantara have been released, and Emanuel was pardoned. Though his pardon has since been overturned and he is once again wanted, he remains free.

The survivors of the attack were nowhere near as fortunate. By 2003, just 10 years after the massacre, only around twenty of the 64 survivors was still alive; many had died violently, be it at the hands of the police, gang wars, or other ways. In perhaps one of the most tragic and highest-profile cases, in 2000, survivor Sandro do Nascimento took passengers on the Bus 174 line hostage after a robbery gone awry (events recaptured in the powerful 2002 documentary Bus 174). As Brazilian media and bystanders flooded to the scene, worsening the situation. As the scene was broadcast nationwide, Nascimento said he did not want to kill anyone, and that he was a survivor of the Candelária massacre. Around 7:00 that evening, he descended the bus with Geisa Firmo Gonçalves as a hostage. A police officer approached to apprehend Nascimento, opening fire and hitting not Nascimento, but Gonçalves; the shot immediately killed her. In the pandemonium, the crowd that had gathered, thinking Nascimento had fired, moved to lynch him. Police prevented a public lynching and took Nascimento to the back of the police car, where, before millions watching across the country, they suffocated him to death, finishing what they had failed to do to him in 1993. The officer who killed Gonçalves was acquitted; not  a single officer was even charged with Nascimento’s murder, reinforcing the social inequalities in which the murder of Brazil’s poor could go unpunished. 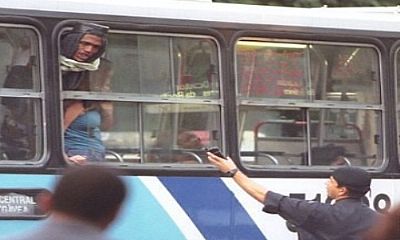 Sandro do Nascimento, one of the survivors of the Candelária Massacre, talks to police from a bus where he held hostages in 2000.

Though Brazilians today recall the deaths of the eight killed on the night of July 23/24 1993, the broader issue of violence against the urban poor remains ignored. Indeed, Mello, the social worker who first worked with the children who were victims in 1993, estimates that there have been over 170,000 street children killed in Brazilian cities in the last thirty years, and their deaths go unpunished.  And so, while we remember the eight children who died that night and the survivors who have since died in poverty (and often violently), the socioeconomic inequalities, legal weakness, and culture of impunity that defined the events of July 24, 1993, continue in Brazil even today. 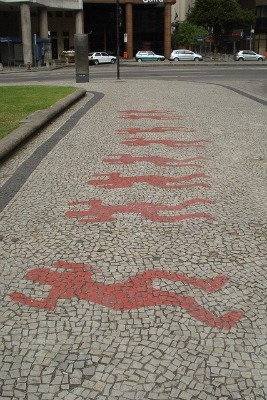 The sidewalk across the street from Candelária Church, with the outline of children’s bodies painted into the stones to remember the eight children police murdered there in 1993.

1 Response to On This Date in Latin America -July 24, 1993: The Candelária Massacre