Recently, the image below made the rounds on Brazilian Facebook pages. The four billboards have stirred a lot of controversy; their messages are a direct attempt to inflame anti-indigenous sentiment in Brazil. They do so by trying to frame indigenous peoples as opposed to the class-based interests of workers by claiming that indigenous groups in Brazil and the governmental Fundação Nacional do Índio (National Foundation of the Indian; FUNAI) are standing in the way of workers’ rights, national development, and “progress” for the country. 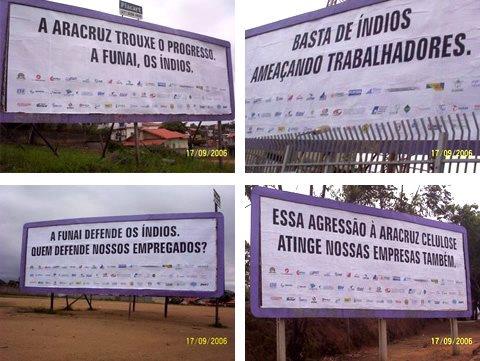 Billboards that have recently gone viral on Facebook in Brazil. They read (clockwise, from top left): “Aracruz brought progress. FUNAI, the Indians”; “Enough of Indians threatening workers”; “This aggression against Aracruz Celulose affects our companies also”; and “FUNAI defends the Indians. Who will defend the workers?”

In making the rounds on Facebook recently, I’ve seen some individuals who have commented on this believing it to refer to the conflict over the construction of the controversial Belo Monte dam, which will flood indigenous lands and which indigenous people and environmentalists have been protesting. However, the actual billboards date back to 2006-2007, when indigenous peoples protested against the Aracruz-Celulose company, one of Brazil’s larger paper producers (since having merged with VCP to form Fibria, a company listed on the New York Stock Exchange).

While not directly tied to Belo Monte itself, the image does tap into some of the broader issues regarding indigenous peoples’ struggles in Brazil then and now. Although the billboards claim to speak for the workers’ interests, such claims gloss over the fact that the struggle was more an issue of industry versus indigenous people. Historically, efforts towards “progress,” as one of the billboards puts it, have often harmed workers as well, leading to labor mobilizations throughout the 20th century in an attempt to improve the working and living conditions of workers through safety measures, wages, better representation, and other labor matters. These struggles continue up to the present, demonstrating that, while companies may try to represent workers in their efforts to counter indigenous claims to land and resources, workers themselves are not always treated well within those companies. Indeed, this past spring, workers on the Belo Monte construction site shut operations down themselves when they went on strike to demand better pay.

Again, the dissonance between the actual context of the billboards (the invasion of indigenous lands and the struggle for production of pulp and paper in 2006-2007) and what people assumed the billboards referred to (the current construction on the Belo Monte dam, which indigenous people continue to oppose due to the loss of lands) is striking, not so much because of the erroneous ties, but because of the actual ongoing issues regarding indigenous peoples, race, and citizenship in Brazil. Indeed, if Belo Monte and Aracruz were different instances, the ongoing uphill struggle indigenous peoples face to protect their lands and have their rights respected is telling. It continues to be clear that, in framing national development and infrastructure versus indigenous rights, the latter definitely continue to fall to the wayside in favor of the former.

I have a Ph.D. in history, specializing in Latin American History and Comparative Indigenous History. My dissertation focused on Brazil. Beyond Latin America generally, I'm particularly interested in class identities, military politics, human rights, labor, education, music, and nation. I can be found on Twitter at @ColinMSnider.
View all posts by Colin M. Snider →
This entry was posted in "Modernity", Brazil, Development in Latin America, Indigenous Peoples, Labor in Latin America, Land Struggles & Issues, Multinational Corporations in the Americas, Race in Brazil. Bookmark the permalink.
Loading Comments...
%d bloggers like this: