Get to Know a Brazilian – João Guimarães Rosa 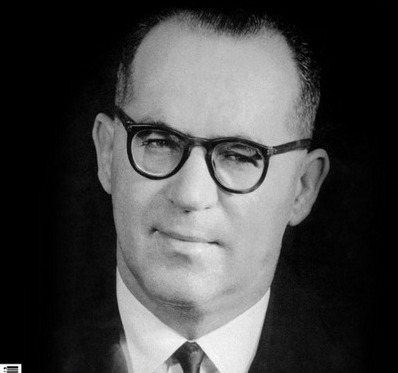 João Guimarães Rosa (1908-1967), one of the most remarkable innovators of narrative and language in Portuguese and arguably Brazil’s greatest fiction writer.

Guimarães Rosa was born in the small town of Cordisburgo in the interior southeast state of Minas Gerais. From an early age, he showed a remarkable intellect, and moved to live with his grandparents in the large capital city of Belo Horizonte, where he had better access to education than in Cordisburgo. Guimarães Rosa demonstrated a particularly incredible mind for language. By the age of seven, he had already begun teaching himself French, and he claimed to know how to speak at least eight languages (including Esperanto and German, alongside other romance languages); he also said he could  read in another four (including Greek and Latin), and that studied the grammar of another ten diverse languages ranging from Tupi (an indigenous language in Brazil) to Sanskrit, from Japanese to Hebrew, among others.

Although Guimarães Rosa proved adept at languages, he went to medical school at what would eventually be known as the Federal University of Minas Gerais. Upon completing his degree in 1930, he opened a practice in the town of Itaguara, Minas Gerais, located in the sertão, a semi-arid expanse in Brazil that stretches from near the Atlantic coast toward the interior of Northeast Brazil. He also volunteered as a doctor in the Força Pública, or Public Force in São Paulo, during Brazil’s Constitutionalist Revolution of 1932. In that civil conflict, the state of São Paulo rose up against the government of Getúlio Vargas, who had been ruling by decree and outside of the Constitution since assuming the presidency in 1930. Ultimately, the fighting ended with over 900 official deaths and as many as 2,200; though the paulista forces were defeated, Vargas agreed to a new Constitution by which he would govern for another five years before establishing the Estado Novo dictatorship. For his part, Guimarães Rosa became a medical officer in the 9th Infantry Battalion in the mineiro city of Barbacena. However, the time he spent in the sertão, combined with his amazing facility with language, set the stage for the fiction that would distinguish him in the 20th century. 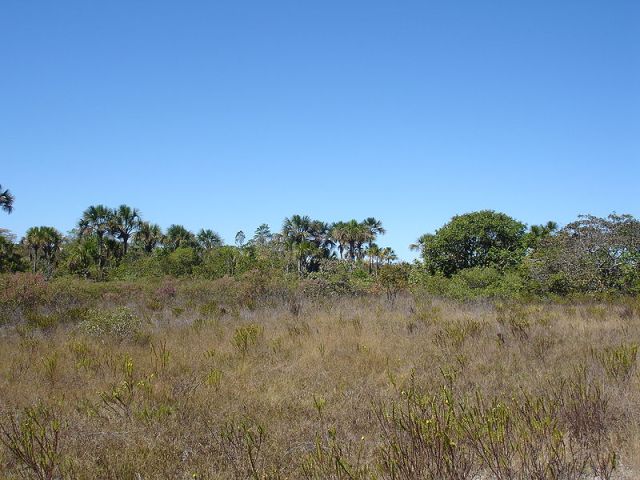 A not-atypical view of the sertão, a semi-arid region in Brazil’s northeastern interior.

Although he was trained as a doctor, by the mid-1930s, Guimarães Rosa began to look elsewhere, commenting on the medical profession that “I don’t think I was born to do this.” He began to prepare for the diplomatic exams through Itamaraty, Brazil’s renowned Ministry of Foreign Relations. Upon completing his work, Guimarães Rosa became an official diplomat, serving Brazil throughout Europe and Latin America. This service included a stint in Germany from 1938 to 1942, during which time Guimarães Rosa provided visas to Jewish people living in Germany in an attempt to help them flee the Nazis. Guimarães Rosa’s efforts went beyond his government’s wishes, as he provided more visas than Brazilian quotas at the time officially allowed, and for his humanitarian efforts, Holocaust survivors and the newly-formed Israeli state would later honor him.

Even while serving as a diplomat, however, Guimarães Rosa had begun writing, drawing on his experiences in Minas Gerais. In 1946, his first work, Sagarana, was officially published [he had previously written a collection of poetry in 1936, but it was not published until after his death and was notably different in style, content, and quality than the later fiction that made him a renowned author]. Sagarana gathered twelve short stories (pared down to nine stories in later editions). Some of these stories exceeded fifty pages in length, but they shared similar themes and styles; indeed, the title itself combined the words “Saga” (as in the English sense of “story”) and “rana,” a Tupi word that roughly means “showing similarities”. That the title itself had this type of wordplay and drew on both Portuguese and indigenous Brazilian words foreshadowed the very “Brazilian” nature and types of neologisms and inventiveness with language that would distinguish Guimarães Rosa’s works from his contemporaries. As for the stories in Sagarana themselves, the environment and ambiance of the sertão looms large, almost becoming a character itself, even while the stories themselves showed a remarkable degree of fable and metaphor. Sagarana also saw the use of rhetorical devices such as anacolouthon and syllepsis, demonstrating a particularly innovative method of story-telling that made Guimarães Rosa’s style almost conversational even while it relied on Portuguese words and neologisms that would make later translations of his works into other languages extremely difficult.

Ten years after Sagarana’s publication, another lengthy publication of two volumes made up of seven novellas titled Corpo de Baile was published. As with Sagarana, the sertão continued to loom large as a force of nature and as a pseudo-character in tales of the rural poor attempting to live in the region. At the same time, however, Guimarães Rosa avoided any directly political statement, instead continuing to rely upon metaphor and fable to provide a far more complex and personal narrative of the lives of (fictional) people in Brazil’s interior.

As impressive as Corpo de Baile was, it could not prepare Brazil for what would be not only Guimarães Rosa’s most impressive work, but one of the most incredible works published in any language in the world in the twentieth century: Grande Sertão: Veredas, a work that in some ways is to Brazilian Portuguese what Ulysses is to English. Although Grande Sertão: Veredas was translated into English in 1963 as The Devil to Pay in the Backlands, much of the originality and flavor of the book was lost in translation, and few of Guimarães Rosa’s books were ever translated. Grande Sertão was in every way an incredible and controversial work. Structurally, it is a remarkably crafted story, told in the first person across 608 pages without any chapters or even any breaks in the narrative. Linguistically, Guimarães Rosa pushed Portuguese to places it had never been, employing a highly-conversational and localized (and in many ways imagined) language that drew on both historical and contemporaneous Portuguese even while giving the language a regional dialect that makes the book difficult even to Brazilians. This inventiveness is apparent from the first word of the book, “Nonada,” which is designed to read like the written version of somebody rapidly saying “Não é nada” (“It’s nothing”). The opening not only shows Guimarães Rosa’s inventiveness with language, but also his playfulness, as made clear by the fact that he starts off a detailed, lengthy, 608-page narrative with the declaration that “it’s nothing.” 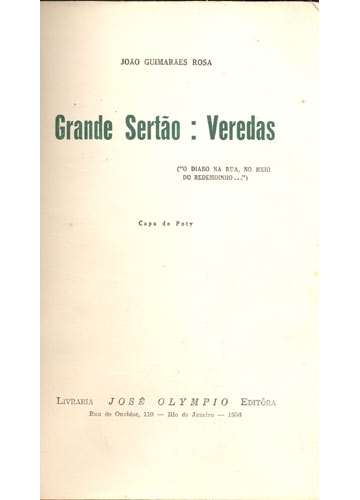 Grande Sertão: Veredas would be an incredible work on the structure and language alone, but it’s the story itself that gives it even more heft and adds a remarkable degree of controversy. It is the tale of the rancher Riobaldo, who is an old man looking back and relating his history as a jagunço, or bandit, to an anonymous listener/the reader. Riobaldo looks back on his time fighting with different groups allied to various ranchers, portraying the local power struggles and competition of life in the sertão. In the process, he becomes extremely close friends with Diadorim, with whom he shares a highly-emotional homoerotic bond (though nothing physical ever takes place between the two). Riobaldo also becomes the leader of a band of bandits, and at a key point of the book, he heads to a crossroads in an attempt to make a deal with the devil for his success, though it is clear through the remainder of the book that he’s not certain if the deal was completed or not. Ultimately, the book ends with a climactic battle between Riobaldo’s band and the rival band, led by Hermogenes. Although Hermogenes ultimately dies, so does Diadorim, and Riobaldo is devastated. However, in the final ten pages [spoilers ahead], as Riobaldo’s men wash Diadorim’s body for burial, Diadorim’s grand secret is finally revealed: Diadorim was a woman. However, this “reveal” could not undo the highly homeroticized relationship between Diadorim and Riobaldo throughout the preceding 600 pages of the book, and the fact that Diadorim had cross-dressed to enter the world of the jagunço only further pushed traditional understandings of gender at a time (the 1950s) when such ideas and narratives were shocking.

“Genius” is a word that is often carelessly thrown about; however, Grande Sertão: Veredas is one of those works where the term is entirely apt narratively, linguistically, and structurally, and the book made Guimarães Rosa a renowned and celebrated figure in Brazil specifically and the Lusophone world more generally. Indeed, Brazil even created a national park in the region where the book is thought to have perhaps fictionally taken place. In the wake of its critical success, Guimarães Rosa was unanimously elected to the Brazilian Academy of Letters in 1963, one year after another collection of short stories, Primeiras estórias, was released, although he did not personally accept the position until 1967, the same year Noites do sertão, another collection of two novellas, was released. In his acceptance speech into the Academy, he commented that “a person dies to prove that he lived;” three days later, on 19 November 1967, Guimarães Rosa himself suddenly passed away from a heart attack at the age of 59.

In one way, that Guimarães Rosa died so young was a tragedy; yet the work he left behind is some of the most incredible fiction put to paper, in Portuguese or any other language, and the quality of that work dulls the loss somewhat. His inventiveness in multiple areas makes him one of those “should have won the Nobel Prize in Literature” figures, alongside Leo Tolstoy, Jorge Luis Borges, James Joyce, Marcel Proust, Philip Roth, and others (though it’s hard to see how his work could have been effectively translated for the prize). To this date, his work is among the most challenging and rewarding of all Portuguese writing. While many rightly celebrate the originality and style of Machado de Assis, Guimarães Rosa’s work is on par if not more remarkable than the man Susan Sontag called “the greatest writer ever produced in Latin America.” Opinions vary on matters like this, but to me, that title belongs and will likely always belong to Guimarães Rosa, not just for Grande Sertão, but for his other works as well. 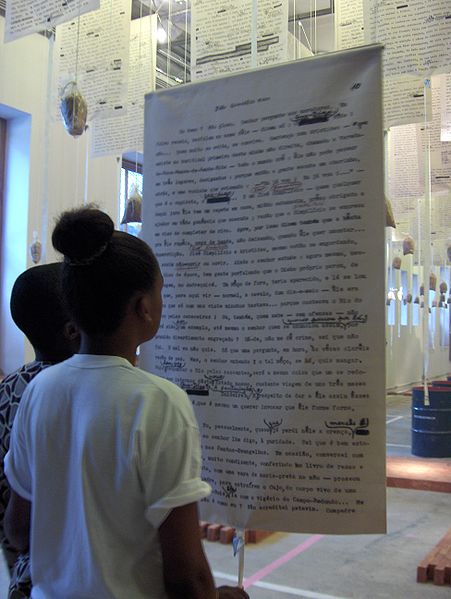 An enlarged copy of a page from the original manuscript of “Grande Sertão: Veredas.” An interactive exhibit on the book, including historical background and examples of the manuscript, toured Brazil from at least 2007 to 2008.

I have a Ph.D. in history, specializing in Latin American History and Comparative Indigenous History. My dissertation focused on Brazil. Beyond Latin America generally, I'm particularly interested in class identities, military politics, human rights, labor, education, music, and nation. I can be found on Twitter at @ColinMSnider.
View all posts by Colin M. Snider →
This entry was posted in Brazil, Brazilian Culture, Gender and Sexuality, Get to Know a Brazilian, Latin American Literature, LGBT Rights & Issues. Bookmark the permalink.
Loading Comments...
%d bloggers like this: