Get to Know a Brazilian – Abdias do Nascimento

This week’s entry in the Get to Know a Brazilian series focuses on Abdias do Nascimento (1914-2011), a politician, poet, and activist who became one of the leading intellectuals and spokespersons for Afro-Brazilians in the twentieth century. Nascimento’s own activism, writings, and words provide a marked contrast to the rosier picture of race in Brazil that Gilberto Freyre offered. 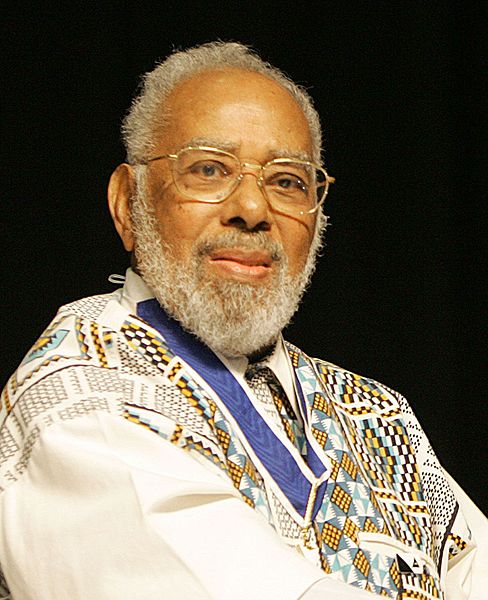 Abdias do Nascimento in 1997, when he was eighty-three. Nascimento was one of the most important thinkers, writers, aUnd activists for black Brazilians, and his work throughout the challenged racism in Brazil.

Originally born in 1914 to parents of humble means and ex-slave grandparents, Abdias do Nascimento grew up in the coffee-producing interior of the state of São Paulo. In his own recollections, Nascimento’s childhood played an important part in his eventual activism, as he recalled Italian immigrant workers as well as middle- and upper-class Brazilians using racial epithets towards him as a child. In his teenage years, he joined the Frente Negra Brasileira, Brazil’s first black political party, which existed from 1931 until 1937, when Getúlio Vargas abolished all political parties and ushered in his dictatorial Estado Novo from 1937 to 1945. Nascimento earned a BA in economics from the Universidade do Brasil (today known as the Universidade Federal do Rio de Janeiro) in 1938.

By his own admission, Nascimento had an epiphany in 1943 while in Buenos Aires. While there, he saw a performance by the Teatro del Pueblo that incorporated audience participation and used theater as a means of popular mobilization and education. Inspired, Nascimento returned to Brazil and began working with other Afro-Brazilians to create the Teatro Experimental do Negro (Black Experimental Theater). Contrary to the more politically-oriented activists of São Paulo, the activists of the Teatro Experimental, based in Rio de Janeiro, incoprorated Afro-Brazilian cultural elements like samba, Candomblé, and other cultural forms with their roots in the African and slave cultures of black Brazilians. Beyond the theater performances, the Teatro also published its own newspaper, Quilombo, a direct reference to the communities of self-liberated slaves in Brazil’s hinterlands during the colonial era. In this period, Nascimento and many of his contemporaries pointed to the idea of racial democracy, which had its roots (but not its original expression) in Gilberto Freyre’s work. These activists suggested that Brazil was a racial democracy, but in order to maintain that democracy, the country had to make sure it was inclusive of Afro-Brazilians. As Nascimento would write at the beginning of the twenty-first century, “The appeal to the principle of democracy constituted, at that point, the most powerful weapon for social demands and political struggles. The motto of racial democracy fit into that context, and the leadership of the black movements brandished it like the banner of Ogum.”[1]

By the 1960s, however, Nascimento’s message and tone had changed considerably. In the context of a military dictatorship that paid lip service to the idea of “racial democracy” even as it exacerbated social and economic inequalities, Nascimento’s work became harshly critical of both the military dictatorship and the rhetoric of racial democracy. He criticized the government’s failure to actually include any Afro-Brazilians in its diplomatic and cultural relations with African nations and intensified his attacks on what he now called the “myth” of racial democracy that glossed over the very real structural and social racism that continued to plague Brazil. Spending much of the dictatorship in exile, Nascimento became both one of the harshest critics of racism in Brazil as well as one of the harshest critics of the military regime on racial grounds. Upon his return to Brazil in the early-1980s, these stances made Nascimento one of the key public figures (though not the sole one) in a new phase of black activism that increasingly fought against systematic attempts to ignore or eliminate Afro-Brazilian culture and politics in Brazil. In this vein, Nascimento spoke out against interracial marriage, the cooptation of Afro-Brazilian cultural practices (like samba and Carnaval) by white Brazilian, and ongoing racial inequalities in education at all levels (including higher education) in Brazil. Although his attitude towards his past stances in the 1940s and 1950s shifted over time, Nascimento continued to be highly active one of the harshest and most direct critics of racial inequalities in Brazil up until his death in 2011 at age 97; indeed, can get a very strong and concise understanding of his views in Henry Louis Gates’ PBS special “Brazil: A Racial Paradise?”, which includes an interview with Nascimento before he died.

While Abdias do Nascimento was not the sole intellectual or activist to shape racial thought and (increasingly) challenge Gilberto Freyre’s model of racial relations in Brazil, he was undoubtedly one of the key figures in Afro-Brazilian politics, culture, and thought in the twentieth century, and his efforts played and continue to play no small part in Brazil trying to understand the racial injustices of its past and to shape a better, more equal and just society going forward.

Much of the information in this post comes from two excellent books on Afro-Brazilian activism and thought. For more on Afro-Brazilian intellectuals, including Abdias do Nascimento, see Paulina L. Alberto’s excellent and prize-winning Terms of Inclusion: Black Intellectuals in Twentieth-Century Brazil. For more on the history of Afro-Brazilian activism in the late-19th and early-20th centuries, see Kim Butler’s Freedoms Given, Freedoms Won: Afro-Brazilians in Post-Abolution São Paulo and Salvador. For more on the Brazilian dictatorship’s appeals to ideas of racial democracy and its problematic emphasis on cultural ties to Africa, see Jerry Dávila’s Hotel Trópico: Brazil and the Challenge of African Decolonization, 1950-1980. I cannot recommend strongly enough these three books to anybody interested in Brazil, Afro-descendant activism in the Americas, black thought in the hemisphere, or 20th-century ties between Africa and the Americas.

I have a Ph.D. in history, specializing in Latin American History and Comparative Indigenous History. My dissertation focused on Brazil. Beyond Latin America generally, I'm particularly interested in class identities, military politics, human rights, labor, education, music, and nation. I can be found on Twitter at @ColinMSnider.
View all posts by Colin M. Snider →
This entry was posted in Brazil, Get to Know a Brazilian, Race in Brazil, Race in the Americas. Bookmark the permalink.

1 Response to Get to Know a Brazilian – Abdias do Nascimento