Get to Know a Brazilian – Antônio Carlos “Tom” Jobim

When people think of Brazilian musical style known as bossa nova, “Girl from Ipanema” tends to be the first thing that pops into one’s mind. And when one thinks of “Girl from Ipanema,” one implicitly or explicitly thinks of Antônio Carlos Jobim, also commonly known by his nickname “Tom.” Together with Vinícius de Moraes, Jobim penned one of the biggest international hits in the history of Brazilian music. 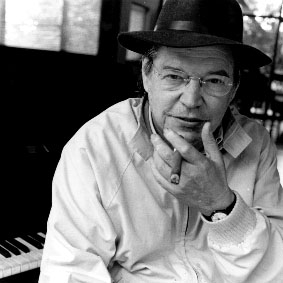 Jobim was born in the neighborhood of Tijuca in Rio de Janeiro in 1927, and had planned on being an architect before he became a musician in his 20s. Well versed in the jazz music that he heard from the United States, Jobim tried to bring the sound of American jazz together with Brazilian samba, African rhythms, and lush orchestrations, leading to the central components of what became known as Bossa Nova, or the “New Thing.” By the 1950s, Jobim was already gaining fame as a composer in Brazil after getting a great opportunity when he co-scored the play Black Orpheus (later made into a film) with Vinícius de Moraes. By the end of the decade, as Brasília neared completion and Brazil seemed on the verge of a modern renaissance, Rio de Janeiro’s middle and upper classes had adopted bossa as their own Brazilian music for the 20th century, (hey had tended to reject samba, which historically was seen as music of the popular classes and Afro-descendants), and the music became inextricably tied to the city of Rio both in Brazil, and in the international community.

Jobim’s international big break came in 1962 when the (then) also-unknown João Gilberto sang Jobim’s “Desafinado,” a song that made both men global successes. Bossa Nova was particularly well received in the United States, as artists such as Stan Getz and Charlie Byrd made Jobim’s pieces household tunes, leading to Jobim’s coming to be known as “the Gershwin of Brazil.” Soon, many less-accomplished jazz artists were offering their own rehashes of “Desafinado” or “The Girl from Ipanema.” It is almost impossible to find a well-known Brazilian artist (and many lesser-known singers) who haven’t tried to do their own Bossa Nova albums; some (such as those by Nara Leão) are far more successful than those by others (Caetano Veloso’s collection has its moments, but often misses). Likewise, in Europe and in the United States, it was almost impossible to escape some cultural reference to Jobim (indeed, in one Monty Python’s Flying Circus episode, Graham Chapman and John Cleese, dressed as British working-class housewives, start humming “The Girl from Ipanema”).

By the mid-1960s, the songs had become overplayed and, as is too often the case, bossa nova was overplayed and cheapened. Musically, the jazz scene was fundamentally shifting by this time, and it may be that, in the socially divided atmosphere that saw the rise of rock’n’roll, Vietnam, and the Civil Rights, there wasn’t as much interest or room for the simple beauty of bossa nova. Although bossa nova’s popularity lived on in Brazil, coming and going up to the present, in the northern hemisphere, it did not fare as well. After the mid-1960s, it fell out of favor in the U.S. and Europe.

None of these transformations ever stopped Jobim from composing and going through his own musical transformations, though. Throughout the 1970s he worked on refining and changing his sound in small but significant steps. On Elis & Tom, he joined with one of Brazil’s most heartbreaking singers, Elis Regina, putting his music and lyrics with her mournful, soft voice. The album starts off with “Águas de Março,” another major classic and a song where Jobim and Regina were clearly having fun. However, the rest of the album refelcted a subtle shift in Jobim’s lyrical content. The sadness he always expressed in his lyrics seemed to be getting even more personal and more concentrated, particularly in the song “Corcovado,” named after the mountain on which the Cristo Redentor sits and a major landmark in Rio (again showing the inextricable connection between Jobim’s music and the city he called home).

After Elis & Tom, Jobim even began to alienate his Brazilian fans, deciding to try new instruments, sound, and structures on the albums Matita Pere and Urubu, the latter of which starts off with the berimbau, a Brazilian instrument made of one string and used to keep rhythm in capoeira contests. Jobim’s music lost much of the “traditional” bossa nova sound on these albums while simultaneously expanding its “Brazilianness” and maintaining the soft, haunting, heartbreaking emotion Jobim had always used. Because he wasn’t making “The Girl From Ipanema II,” these albums did not sell the way his old material had in Brazil or in the international community, and Jobim’s output slowed down without ever stopping. This is a shame, because Matita Pere and especially Urubu are two remarkable and wonderful records, floating in and out sonically but with an emotional intensity that is lacking in most other bossa nova.

For whatever reason, Jobim’s music experienced a bit of a revival in the latter half of the 1980s , as his music once again filled the living rooms of young and middle-aged bourgeois homes as yuppies tried to show how “cultured” they were, which again was a shame, because the music was far better than many of its “fans” probably realized. Still, the revival was enough that Jobim started hitting the road to tour, and playing and recording music (live and in the studio) both in Brazil and the U.S. It was on one such tour, in 1994, that Jobim died suddenly of a heart attack at the age of 67. His body was returned to Brazil, and he was buried in the Cemitério São João Batista in Rio de Janeiro, not far from other national figures like Carmen Miranda, Heitor Villa-Lobos, and his colleague and friend Vinícius de Moraes. 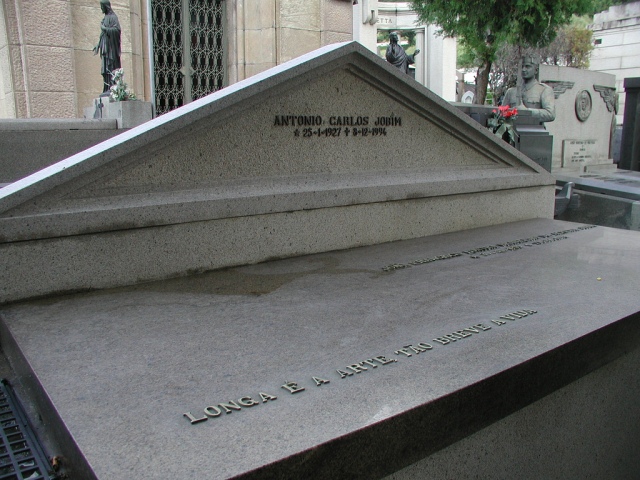 Like bossa nova itself, Jobim’s grave is simple yet elegant. “Art is long, life is too brief.”

Nowadays, Jobim’s music is really only known in the states by people who may have heard “Girl from Ipanema” or in the above-55-years-old demographic. The cheap commercialization of his early production still abounds, and there are numerous third-rate covers of his music on contemporary “jazz” and easy listening albums. All of this is an enormous shame, because, despite its apparent simplicity, Jobim’s music revealed subtle complexities in the versions he himself recorded, with strings quietly swelling to add depth, subtle changes in tone and timber, and, later in his career, increasing instrumental experimentation. His bossa nova material is still top-notch – just listen to the albums Wave or Stone Flower, both with just instrumental songs, and the true beauty of bossa nova becomes crystal clear. It’s not hard to see why so many artists both thought they could also do that and failed so miserably.

(This is an updated version of a post I originally wrote a few years ago).

I have a Ph.D. in history, specializing in Latin American History and Comparative Indigenous History. My dissertation focused on Brazil. Beyond Latin America generally, I'm particularly interested in class identities, military politics, human rights, labor, education, music, and nation. I can be found on Twitter at @ColinMSnider.
View all posts by Colin M. Snider →
This entry was posted in Brazil, Brazilian Music, Get to Know a Brazilian, Latin American Music. Bookmark the permalink.