Image of the Day – More Anti-Dictatorship Graffiti in Argentina

Continuing the theme of how the Argentine “Dirty War” continues to play a very visible role in public perceptions and memory in Buenos Aires, here is another example of the street graffiti I saw in 2007. The final phrase (“Mirar para otro lado”) refers to the ways in which Argentines looked away when military police dragged “subversives” screaming off of crowded streets, throwing them into police vehicles and most likely to their deaths, fearing that to try to stop the police would only lead to those who spoke out meeting a similar fate. The man portrayed in this image is Jorge Videla, the military general who led the junta that took control in 1976 and who was the longest-serving president of the Argentine dictatorship, leaving office only in 1981. 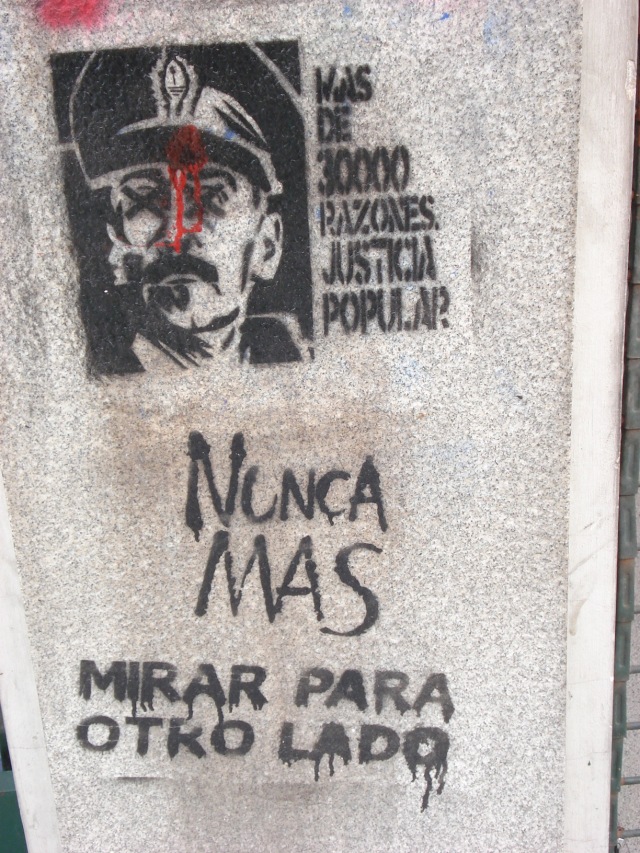 "More than 30,000 Reasons for Popular Justice - Never Again Look the Other Way"

I have a Ph.D. in history, specializing in Latin American History and Comparative Indigenous History. My dissertation focused on Brazil. Beyond Latin America generally, I'm particularly interested in class identities, military politics, human rights, labor, education, music, and nation. I can be found on Twitter at @ColinMSnider.
View all posts by Colin M. Snider →
This entry was posted in Argentina, Argentina's Military Dictatorship (1976-1983), Buenos Aires, Human Rights Issues, Image of the Day, Memory Struggles, Military Dictatorships. Bookmark the permalink.