This week’s images focus on the presidents of Brazil’s military dictatorship of 1964-1985. Although the military ruled Brazil for twenty-one years, it attempted to maintain a facade of democracy in a number of ways, including having generals “run” for president, with the result that five different generals governed Brazil.

The first of these presidents was marshal Humberto de Alencar Castelo Branco. Castelo Branco had a long and storied career in the military. He was among the Brazilian Expeditionary Force that fought in Italy during World War II. While serving in Italy alongside American troops, Castelo Branco made many important friends and contacts; Vernon Walters, the military attaché to the U.S. consulate in Rio who kept close tabs on the coup developments, was a personal friend of Castelo Branco’s and probably played a role in supporting the marshal’s presidency.

Castelo Branco took power shortly after the military overthrew president João Goulart in April 1964. While Castelo Branco was not the leader of the coup itself, he was the highest-ranking official in the military, and the respect he commanded from soldiers and civilians alike made him a fairly obvious choice for president. In the three years he governed, Castelo Branco oversaw the early institutionalization of military rule, including the suspension of political rights for “subversives” and opposition politicians, the creation of Institutional Acts that restricted democracy in Brazil, and the early use of torture against the new regime’s “enemies.” Although the military generally provided a united face to the public, behind the scenes it was divided roughly into “moderates” and “hard-liners.” While Castelo Branco’s administration violated a number of human rights, he was in fact the first leader for the “moderates,” and unsuccessfully attempted to forestall the hard-liners’ rise to power. Ultimately, Castelo Branco left office in March of 1967, leaving behind the foundations for a regime that would become increasingly repressive in the late-1960s and early-1970s as it tortured thousands and murdered hundreds of its own civilians. However, Castelo Branco would not see Brazil spiral down into an increased repression that he directly and indirectly shaped: just four months after leaving office, he died in a helicopter crash, escaping the increased political repression and state-sponsored violence many other Brazilians would endure. 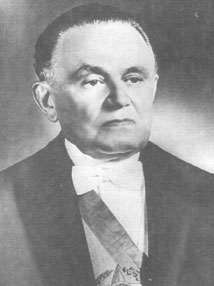 I have a Ph.D. in history, specializing in Latin American History and Comparative Indigenous History. My dissertation focused on Brazil. Beyond Latin America generally, I'm particularly interested in class identities, military politics, human rights, labor, education, music, and nation. I can be found on Twitter at @ColinMSnider.
View all posts by Colin M. Snider →
This entry was posted in Brazil, Brazil's Military Dictatorship, Image of the Day, Military Dictatorships. Bookmark the permalink.