Image of the Day – Islam in Colombia

First, I apologize for the lack of posts lately. I fell ill late last week, and have been trying to play catch-up since Monday.

Continuing the theme of religions in Latin America for one more week, I thought it would be worthwhile looking at Islam in the Americas. Latin America generally has a small Muslim population currently, but Islam’s roots in the Americas go back hundreds of years. The first wave of Latin America’s Muslims arrived when African Muslims were brought to South America as slaves. A second wave of Muslim migration to the Americas took place in the late-19th and early-20th centuries, immigrants from Lebanon, Syria, and Palestine came to the Americas, settling in countries like Brazil, Colombia, Mexico, and Argentina. Colombia is home to roughly 14,000 Muslims today, and the Mosque of Omar Ibn Al-Khattab in Maicao, Colombia is the second-largest mosque in Latin America, with an ability to seat over 1000 people. 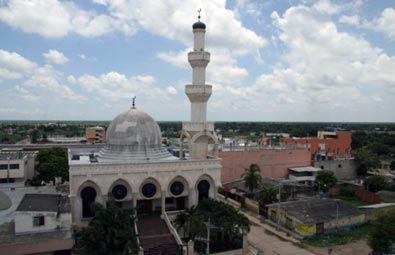 I have a Ph.D. in history, specializing in Latin American History and Comparative Indigenous History. My dissertation focused on Brazil. Beyond Latin America generally, I'm particularly interested in class identities, military politics, human rights, labor, education, music, and nation. I can be found on Twitter at @ColinMSnider.
View all posts by Colin M. Snider →
This entry was posted in Colombia, Image of the Day, Latin America, Muslims in Latin America, Religion in Latin America. Bookmark the permalink.
Loading Comments...
%d bloggers like this: